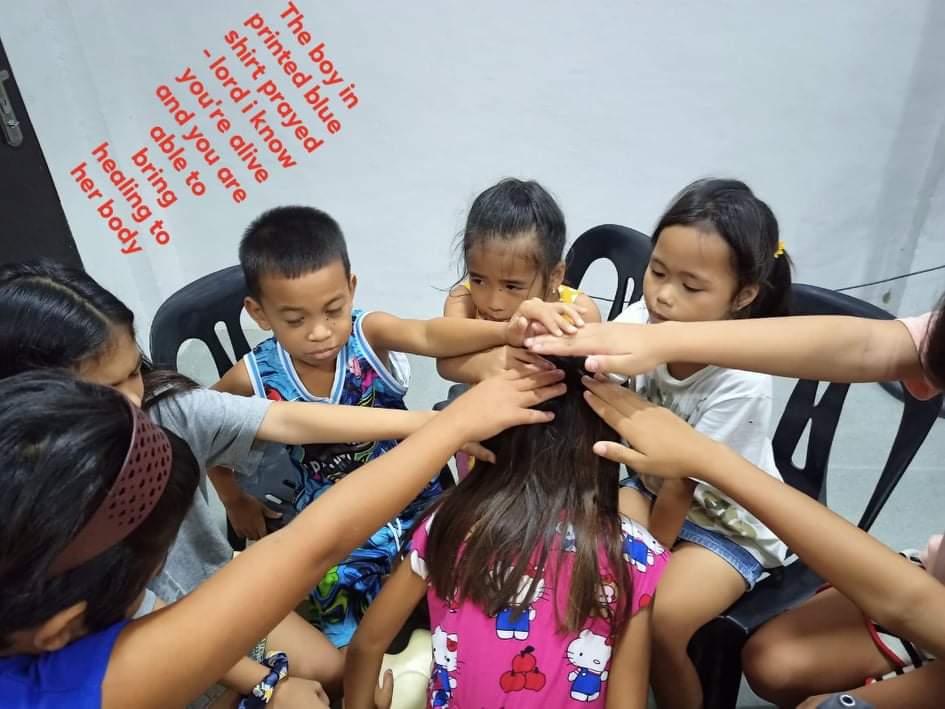 Here is a powerful testimony one of our children’s workers, Evelyn Asuncion shared with us this weekend:

“Last Thursday at our weekly prayer meeting, I had a great time praying with our children from the kids club. We did the things we usually do. We sang, we heard a message then divided the groups into 5 for the prayer time. Às I was walking around and checking on groups I noticed that some of our kids were there, but not part of the group. So I gathered them and told them that we would also pray. They were so excited to join the prayer time. So then, I told them everyone will pray. One of the girls told me, “Maam Belen I can’t pray, I don’t know how to pray”. So, I just told her it’s ok. But when it was time for her turn to pray, she was so happy to tell me that she now wanted to pray!! There were close to 50 people in the church that day, and it was raining so hard. You could hardly hear anyone except for the prayers of those kids who were praying so loud!!!

One of the girl was sick that night, her Grandma told me, so I told the kids that we will pray for her. I was thinking that I would lead the prayer. But one of the kids said, “Maam Belen we will all pray for her!!!! So that’s what we did. And one of them (see picture above — the little boy in the blue shirt) prayed a very powerful prayer! It really made my day!! He said LORD, I KNOW YOU ARE ALIVE AND YOU ARE ABLE TO BRING HEALING TO HER BODY!!! WOW! HALLELUJAH!! After we prayed for her one boy said, MAAM BELEN LET’S DO IT AGAIN, ROUND 2!!! And we did the round 2!!! Praise the Lord!!!

When I saw that girl a few days later, she excitedly testified that she was doing fine now. Praise the Lord for hearing and answering our prayers!”