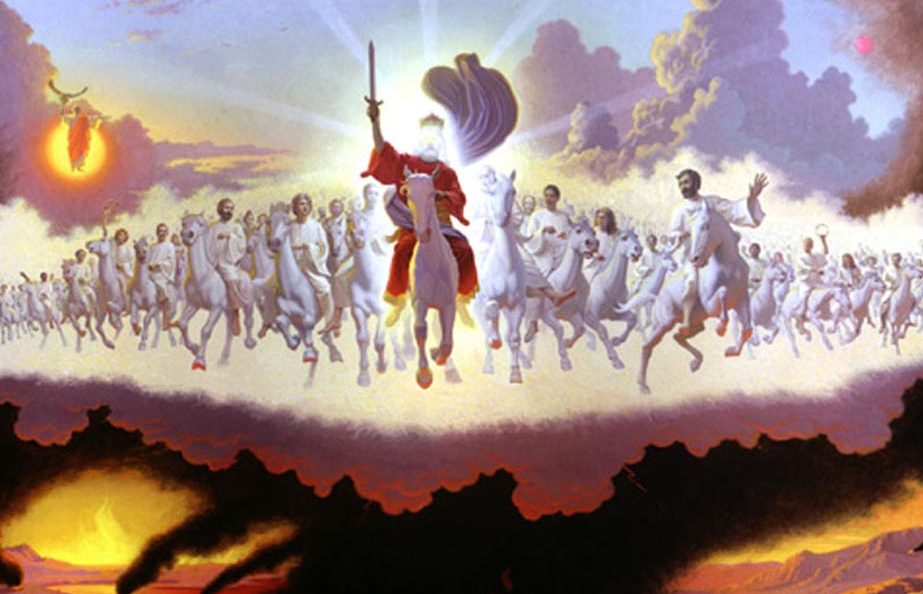 I heard two stories today about Jesus coming very soon, along with the URGENT exhortation to GET READY!

Shortly after arriving home from a Bible Study gathering this evening, my wife shared an amazing story that was told her this afternoon at ‘Kids Club’ by one of the young girls. Colleen was hanging out with her, waiting for some of the others to arrive when the 8 year old girl started telling her voluntarily about a dream she had last night. I was totally amazed at the vivid description of Jesus Second Coming that was told by her! It was a very clear, Biblical dream! When I called her on the phone, & asked her some questions, and she also told me her dream. Here it is…

In her dream, she said that she was in her room coloring or reading her Bible or something when she heard a loud noise that sounded like a volcano exploding. When she went outside to see what was happening, and looked up into the sky, she saw a very bright light in the sky. The clouds opened up. She saw coming through the clouds lots of horses – so many she couldn’t count them all (maybe millions)… She said that angels were riding on the white horses because she saw their white wings. The white horse in front had a man riding on it. He had white clothes, with a scarf (satchel) colored red over his chest, and a crown on His head! Then she woke up… “That’s all”, she said.

If you want to know something else amazing, then the little girl started preaching to me. She was telling us “we need to be ready for Jesus to come! We don’t know when He’s coming, so we always need to be ready”…

(Playing the piano and singing a praise song at our regular, weekly Bible Study in her home last Saturday…)

KOREAN MAN DIES, GOES TO HEAVEN & COMES BACK WITH A MESSAGE

You can listen to Pastor Cho tell this incredible story that he claims to be true at the following link. He knows it is a true story because it happened to one of his associate pastors, and Pastor Cho was also involved with some of the details. Link: https://youtu.be/vIDliIhWNjI Heaven Testimony (Yonggi Cho) — approx. 14 minutes.

Here’s a brief summary of the story:

An associate pastor’s wife died, and was buried. Five days later his children were all crying. The pastor was depressed & heart-broken. He felt like his heart was thrust through with a big sword, and he had a massive heart attack and also died. He fell over, dead. When Pastor Cho got a message to organize a funeral for burial, the pastor was already dead. They had already issued a death certificate for him – he had been dead for around 3 days. Pastor Cho personally organized the funeral committee to bury him. People prepared his body, and then before putting him into the casket, apparently they were singing a song — something about about Lazarus rising up — when suddenly the man rose up! He came back to life! All of the ministers ran out of the house they were so frightened! There he was – sitting by his casket, waving them to come back in — ! They were scared, thinking that they saw a ghost! When they finally came back in and touched him, they found out that he was really alive! He had been really dead – they had his death certificate to prove that he had actually died from a massive heart attack – but now he was alive!

This is the story that he told after he came back to life:

At the time of his heart attack, he fell over. When he fell, he saw 3 stars falling from the sky. As the stars came near he saw that they were 3 angels. They said, “let’s go home” & escorted him toward heaven. As he departed he looked back and saw his body lying there. He said that they went on a “super-highway” to heaven. It was like they were riding an escalator. There were a lot of people also riding on it. He saw many BIG stars. They arrived at a vast place in the universe — so bright, so glorious, so beautiful! They finally came to the heavenly city – New Jerusalem. The doors opened. Jesus was standing there, and hosts of angels — waiting… Hallelujah! There was a river flowing from the throne. There were so many trees on the sides of the river, and abundant fruit everywhere. Angels & people were sitting on benches near the trees eating the fruit that turned into fragrance. There was beautiful music! When he came to worship our Father, he came to a gigantic auditorium filled endlessly with people — millions & millions & millions of people and angels were there, worshiping God like waves of the sea. They were bowing down and worshiping. The beautiful music and peace and joy were heavenly & unspeakable! He joined with them in bowing down, worshiping & rejoicing. God was like a big mountain of light. He couldn’t clearly see His image because He (the Father) was such a big image of light. The pastor asked to see his wife who had just died 5 days before. Jesus told him that he was there because of the request of his wife… Jesus took him to a glorious mansion. He saw his wife. She was wearing beautiful clothes, and looking so pretty and beautiful & transformed! She talked with him. She told him that she had asked Jesus to bring him there because their children were so sorrowful. She told him when he went back to the earth, tell the children their mother is more alive here than she was there on the earth! Tell them their mother is very happy here! Tell those boys that they will all become ministers, and to be faithful to Jesus Christ. Tell them to share the gospel and come here to heaven and meet here together…

He wasn’t there very long, but he saw many fantastic mansions. He saw that His wasn’t completed yet. His good works that he would do when he went back to earth were to be the materials to complete it. Then he needed to come back to earth. He came back to earth the same way he went, entered back into his body, and rose from the dead!